Why would CBS steal the name and branding of this 40-year-old LGBT publication?

It’s a classic case of big guy vs. little guy — but this time, the little guy is a gay media company that’s been covering LGBTQ news and events for almost 40 years.

And the big guy, improbably enough, is CBS.

Denver-based OUT FRONT is an LGBTQ newspaper that’s been dutifully breaking news since 1976.

In fact, it’s the second-oldest independent gay publication in the US.

Long before gay lifestyle publications became widely available, founder Phil Price printed the first issue of OUT FRONT in his parent’s basement, envisioning a “very in-your-face and rebellious” paper that provided the LGBTQ perspective that was so sorely lacking in mainstream media at the time.

“The voice of OUT FRONT is a legacy that our community can’t afford to lose,” says current owner and publisher Jerry Cunningham.

It’s beguiling that a media behemoth of CBS’s stature would be so intent on unnecessarily stealing the brand and logo for their “outdoor” advertising division, recently christened Out Front and apparently cribbing the paper’s logo and design.

Whether it’s merely a coincidence or an outright steal, the similarities between the two are impossible to deny:

“This scenario is a reflection of the popular story of David versus Goliath,” Cunningham says. “We certainly believe we’re in the right. The questions is how long can we afford to stand in the right before we get our day in court?”

According to Cunningham, the publication has been in contact with CBS, and the company is all too aware of the conflict.


“We’ve discussed and shared our position on the shocking similarities of our two brands,” he says, “as well as the damage and confusion that we feel it’s causing. Coincidence? OUT FRONT has been in business for nearly 40 years — and for any company to considering using OUT FRONT as their bran… wouldn’t a simple Google search suffice? Someone was literally cutting corners when they designed that logo.”

OUT FRONT isn’t a billion or even million dollar media company; it’s a very small business that’s now being forced to spend hundreds of thousands of dollars on attorney fees in order to protect their nearly four-decade legacy.
It’s not a battle Cunningham plans to take lying down.

“We’re up against deep pockets,” he says, “which is why we’ve started crowd-sourcing funding. Our goal is to find 1,000 people that will take up the fight with us, and directly share our story with at least 10 of their friends.”

CBS Outdoor — now Outfront Media Inc.(OMI) — has demonstrated a willingness to sell advertising space to just about anyone, even those who are known to actively work against the LGBTQ community: Chick Fil A, The Salvation Army, and Cracker Barrel are just a few companies that advertise using CBS’s billboards. 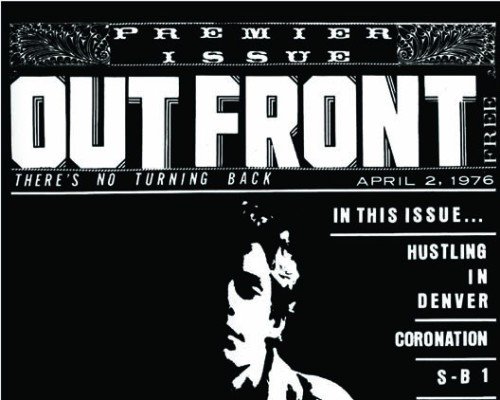 It’s a bitter pill to swallow for a publication that exposed Coors 1977 hiring protocol of screening for homosexuality.

“We firmly believe that use of OUT FRONT‘s brand with OMI’s intolerant advertisers will cause us significant damages to our reputation,” Cunningham says. “With the upcoming election, we’re expecting to see supporters of religious freedom pulling out all of the stops in getting their message out there.”

“It’s my belief that OMI wants us to know they have the power to destroy us,” Cunningham says, “and they will use that power if we don’t buckle to their wishes. OMI’s recent frontal attack to our brand demonstrates the company doesn’t care a whit about the damage it’s causing and the confusion it’s creating with the public. It’ll continue like a juggernaut to destroy our business unless it’s stopped.”

He feels his situation is symptomatic of a deeper problem.

“I believe that it has become too commonplace for big corporations to feel they are entitled to just do whatever they want,” he says. “At what point do we say enough is enough?”