This week, The Advocate, a national LGBT publication, obtained the rights to serialize excerpts from LGBT pioneer Mark Segal’s long-anticipated memoir, "AND THEN I DANCED: Traveling the Road to LGBT Equality". Segal is a featured columnist at #Boom Magazine.

"Mark Segal is a beloved and respected activist for the LGBT movement, and he's a pivotal voice to tell our story," says Lucas Grindley, editorial director for Here Media. "It's important that LGBT history be told by those who worked directly to shape it—because our story must be remembered accurately, and with the passion it deserves." 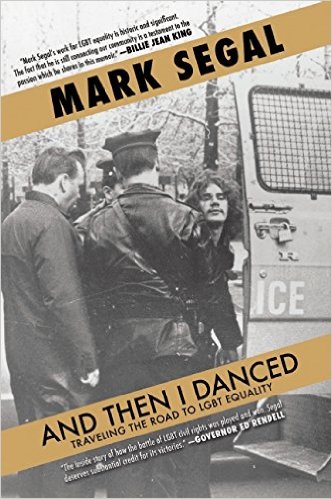 In "AND THEN I DANCED: Traveling The Road to LGBT Equality" (Akashic/Open Lens), Mark Segal chronicles his involvement in this crucial chapter of American history as a prolific activist for LGBT rights. Beginning at the Stonewall riots of 1969, his disruption of the CBS Evening News with Walter Cronkite broadcast in 1973 and his various attempts through the years to capture the nation’s attention with radical LGBT demonstrations. He has been honored with numerous awards in journalism (NLGJA), communications (NAMIC), and also a Lifetime Achievement Award from the GLBT Alliance.

"AND THEN I DANCED" is in its second printing after its October 6th release date. It is fitting that The Advocate will share Segal’s 46 years of LGBT activism in their publication as The Advocate itself has been the brand of record of the LGBT community for almost a half century. Excerpts will appear on November 16, 18, and 20, 2015, spanning from the Stonewall riots to President Obama.

Akashic Books is a Brooklyn-based independent company dedicated to publishing urban literary fiction and political nonfiction by authors who are either ignored by the mainstream, or who have no interest in working within the ever-consolidating ranks of the major corporate publishers.

The Advocate is currently available to consumers via the print publication, online at Advocate.com, and via mobile devices.

The first installment can be found at: http://www.advocate.com/books/2015/11/17/stonewall-white-house-mark-segals-gripping-memoir

Mark Segal's "And Then I Danced, Traveling The Road To LGBT Equality" Can be purchased online at Amazon, Barnes & Noble, Target and other online booksellers or your local bookstore.

Press Release contributed to this article.