The queens of RuPaul’s Drag Race must save the galaxy in their brand new Werq the World show, touring the USA and Canada with stops at Kansas City's Arvest Bank Theatre, September 11th, and St. Louis' Pageant Theatre, October 10th. 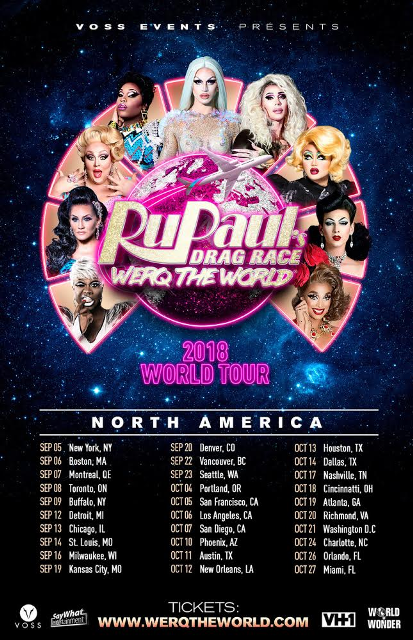 Produced by Voss Events, Drag Race producers World of Wonder and VH1, the all-new production follows a team of intergalactic queens including Aquaria, Asia O’Hara, Detox, Kameron Michaels, Kim Chi, Monét X Change, Naomi Smalls, Violet Chachki and four queens from RuPaul’s Drag Race Season 11 on their mis-sion to the sun. Mission leader Michelle Visage guides the audience through the universe for a dynamic display of the wonders held by each planet and its regal sovereign. Tickets on sale now at VossEvents.com.

“This is the biggest, most elaborate production we have ever created,” says Brandon Voss, the show’s producer. “The music, sets, fashion, chore- ography and lighting are all a cosmic feast for the senses. Audiences will be in awe as their favorite queens come together on some incredible numbers.”

“Werq the World is the official Drag Race tour for a reason,” adds Visage. “The show has always been a theatrical production of the highest caliber but in 2019, we have stepped it up into the stratosphere. This show leaving fans gagging and I’m not afraid to say that my performance, in particular, is giving them life.”

The Werq the World Tour 2019 started the year in Asia and Australia and played over 30 cities in Europe this spring. Following the USA and Canada, the tour will finish the year in Latin America.

Voss Events is a leading production company that consistently delivers superior entertainment programming. Past events have featured stars such as Lady Gaga and Cher.

Tickets for the Werq the World TOUR 2019 are on sale now at VossEvents.com.