Review: "The Diary of Anne Frank" @ The New Jewish Theatre 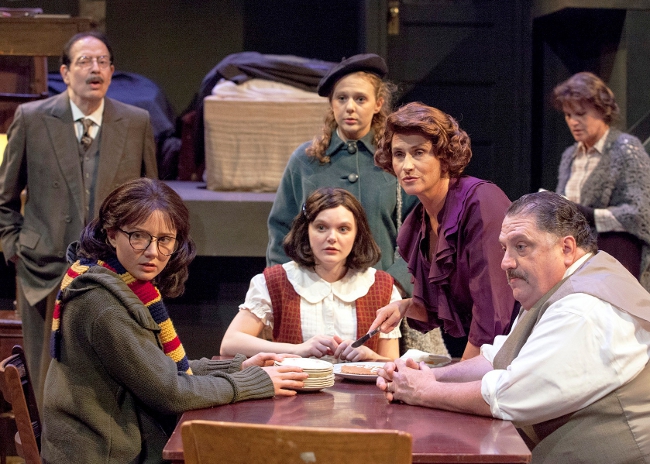 The New Jewish Theatre kicks off their 18th season on an outstanding note with their production of The Diary of Anne Frank. Told from the perspective of the undeniably iconic teen Anne Frank (Samantha Moyer), the story follows the lives of eight Jews who were forced into hiding to escape the persecution of their race from Nazi Germany.

The Frank family consists of Anne, her older sister Margot (Taylor Steward), her mother Edith (Amy Loui), and her father Otto (Bobby Miller). They are joined by the Van Daan family which consists of Mrs. Van Daan (Margeau Steinau), Mr. Van Daan (Jason Grubbe), and their son Peter (Leo B. Ramsey). The last refugee to join the group is Mr. Dussel (Terry Meddows).

This group is given safe haven courtesy of Mr. Kraler (Eric Dean White). They are visited daily by Miep (Stefanie Kluba) who delivers the group food and other requested items.

The story arc follows the group of eight as they had to endure the stress and strain of living in hiding for two years. Tensions rise, nerves fray, and young Anne is forced to deal with her changing body and emotions as the outside world descends into madness. Despite getting news that the Allied forces have landed and their liberation is sure to happen soon, time runs out for the group as Nazis flush them out of their hiding place and into the concentration camps.

This compelling story is brought to life by an extremely talented cast and crew. Out of the eight main characters, each performance was fantastic. All eight worked together flawlessly creating magic on the stage.

Moyer, in the role of Anne, was phenomenal. Her spirit was undeniable, her delivery was captivating, and her energy was infectious. This talented actress commanded my attention in every scene and that is saying something with this talented cast.

Miller’s performance, as Otto, was comforting. That should be no surprise as this award winning actor has been in the business for over 40 years. His performance was completely genuine. There is something in his voice that draws the audience into his performance. A deep, soulful resonance that gave his delivery emotional weight. The stage chemistry between him and Moyer was sensational.

Also outstanding is the understated performance of Ramsey as Peter. While this talented actor may not have had the biggest role, he gave one of the most convincing performances. You could feel the tension in the air via his body movements and the grim look on his face. Stand out performances were also given by Steinau Mrs. Van Daan and Meddows for giving this production some comedic relief in his role of Mr. Dussel.

The real charm of the show is the relationship Anne has with the other characters. Her moments with Otto are tender, with her mother they are tense, and with Peter they are precious and real.

Technically, this production fires on all cylinders. The costumes were detailed and eye-catching, the set was visually stimulating, and the lighting was exceptional. Director Gary Wayne Barker's perfect staging was matched by the productions quick pace in keeping the action moving while maximizing the emotional moments throughout.

From start to finish, this production of The Diary of Anne Frank was breathtaking. Outstanding acting, brilliant technical aspects, and a compelling, true life story all combine to make this is a must see production.