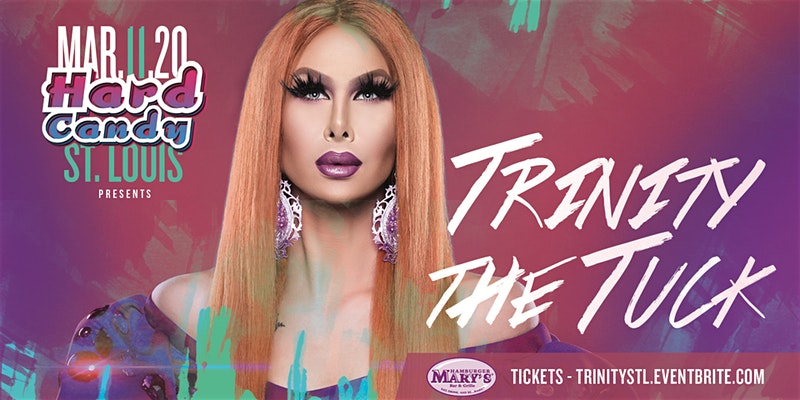 “We couldn’t be more excited to work with Hard Candy St. Louis to bring such amazing performers like Trinity “The Tuck” Taylor to our stage,” says David Pardue, co-owner of Hamburger Mary’s St. Louis. “This new partnership will allow us to showcase and bring many of the talented drag queens from RuPaul's Drag Race to our St. Louis stage.”

Trinity “The Tuck” Taylor competed on Season Nine of RuPaul's Drag Race, and was co-winner, along with Monet X Change of RuPaul's Drag Race All Stars Season Four. She will take to the Hamburger Mary’s Stage on Wednesday March 11 at 9 p.m. There will be a Meet & Greet at 8 p.m. Tickets range from $20.00 to $30.00 and are available at trinitystl.eventbrite.com.

Hamburger Mary's is an open-air bar & grille for open-minded people, serving a full menu of tasty items… Big and juicy gourmet burgers, yummy apps, soups, salads and entrees, and an extensive bar menu featuring craft beers and cocktails. Hamburger Mary’s offers a flamboyant dining experience, along with nightly entertainment from its “Dining with the Divas” drag shows and charity “HamBingo Mary’s” to MaryOke-Karaoke and trivia nights.