Best known for her barrier breaking portrayal of Lt. Uhura on the original Star Trek series and films, Nichols has enjoyed a storied career with appearances on TV shows like Heroes and received critical acclaim on Broadway and beyond as actress, singer and voice artist. 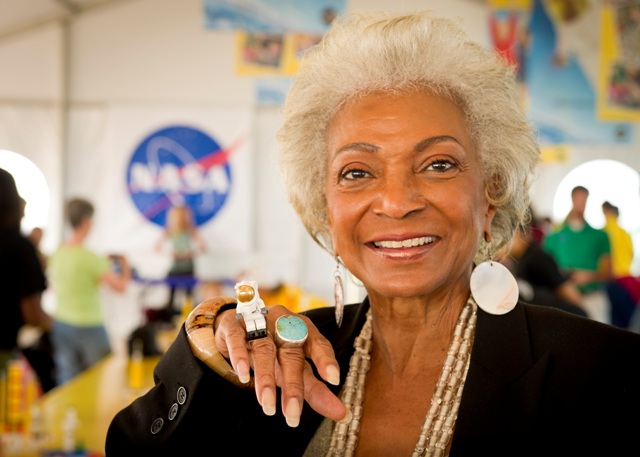 Nichols is lauded for breaking down the color lines on television in a racially charged era, was the first African American to have her handprint in front of the famed Mann's Chinese Theatre, and even toured with Duke Ellington. But it is her work with NASA, which inspired Dr. Mae. C. Jemison to become the first black female astronaut, that she thinks is her greatest achievement. We don't disagree!

You've attended myriad Comic Cons over the years - what keeps you coming back - and do you have a particular memory that jumps out?

It’s the fans that keep me coming back, their energy just really adds something magical to my life. And, something most people might not realize, but there’s a community of us that travel to these shows every year, all over the world, and see each other every time. They are some of my best friends.

Your role in Star Trek was a racial barrier breaker. Was the advice you received from Dr. Martin Luther King to stay on the series something you sought, just a happenstance, or did someone put you two together for that purpose? Tell our readers about that exchange. It's very powerful.

It was chance that we were in the same club together, right after I’d told the Star Trek crew I was leaving to pursue my dreams on Broadway. But, there was someone there who very much wanted us to meet. He tapped me on the shoulder and said, “Nichelle, a fan of yours would like to meet you.” Who?

It was Dr. Martin Luther King.

What your role means to the people of color watching back home … You are changing the minds of people across the world, because for the first time, through you, we see ourselves and what can be. You can't leave.

You don't exactly say no to Dr. Martin Luther King.

What are your thoughts on the latest Star Trek series? Are you surprised that it's taken this long to have openly LGBTQ characters?

I don’t think that they ever didn’t have LGBTQ members, there wasn’t much about relationships at all in the early days, anyone could have been anything! And probably were.

You have a loyal LGBTQ fan base - when did you first become aware of gay issues?

My friends have always been very, metropolitan. Every color, every religion, every gender. I’ve always had friends and family from every walk of life, and have been there for them for every struggle they might have. I don’t know if I’ve ever not been aware!

Any comments on the #MeToo movement? Did you experience any harassment in your career?

It’s terrible to see, and shining a spotlight on the dark corners is the best way to find the dirt. I am blessed to say I have not had these struggles, and am here to help support anyone who has.

What's your favorite Star Trek episode and movie that you were in?

Filming in San Francisco was so much fun in "The Voyage Home". I love any time Uhura goes down to the planet, even if its our own, and I had a lot of fun trekking in that one.

Last question - how would you like to be remembered? Does it frustrate you that we focus so much on Uhura?

Not at all, I’m very proud of my work there. But, I think my greatest legacy is helping inspire others to pursue careers in real space exploration. It made me very proud to see the first women and minorities, that I helped recruit, have such amazing careers in NASA.