Ginger Minj: There's No Shutting Her Up!

Ginger Minj sashayed onto the set of RuPaul's Drag Race season 7 with an oversized mouth to match her oversized talent, and in the process, became the first "big girl" to place in the top three on the celebrated reality show.

Ginger, "The Comedy Queen of the South" and self-professed member of the "Bitter Old Lady Brigade" delighted fans with her quick wit, comedic talents and polished, put-together persona and performances.

The down-home diva and Drag Race stars from seasons past are Missouri bound, along with emcee Michelle Visage, for RuPaul’s Drag Race: Battle of the Seasons Extravaganza Tour on June 7 and 8 in St. Louis and Kansas City.

#Boom Media had a chance to catch up with Ginger to talk about the tour, her new album, new outlook, and those pesky Reddit fans. 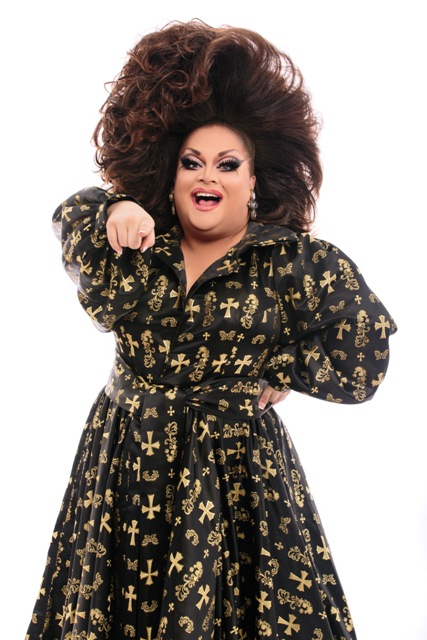 We're super excited about Battle of the Seasons returning to Missouri - could you talk a little bit about what you have in store for audiences?

Well, I've actually got an album coming out later this year. It's a really special album, very unlike anything any of the other Drag Race girls have ever done, and I'll be previewing some of that on the Battle of the Seasons tour, as well as revisiting some of the things that made me popular on season 7. Like I'm going to do Adele, definitely, and pay a little tribute to her - and who knows what else might pop up - but it's an amazing show we have in store.

You said your album is different than anything any other Drag Racer has done. Tell us about it.

Absolutely. We've actually taken a year to record it. It's a very personal album that kind of tells, loosely, the story of my life up until this point. It's produced by Jean Morisson and Diego Paul Sánchez (MorissonPoe, Nile Rodgers). Diego works with Nile Rodgers who did Madonna's Like a Virgin and Duran Duran and Chaka Khan and all of them. I've got duets on there with Margaret Cho and Jinkx Monsoon and Carnie Wilson from Wilson Phillips. It's kind of got its own sound. It's kind of like if Jennifer Holliday and Meatloaf met and had some kind of weird musical baby.

It's so much fun and it's really personal and I can't wait to just sort of share that with everybody.

So what are your thoughts about hitting the road across the United States and Europe with all of these over-the-top personalities from Drag Race?

[Laughs] Wellllll, luckily I know these girls so well - we are definitely sisters and even though we may fight there's a whole lot of love and a whole lot of fun that we have when we're together. So I'm excited about it, I'm really excited just kind of feeding off of everybody's energy. That's what makes Battle of the Seasons such an out-of-this-world, crazy kind of experience not only for the audience but for us as well. Because there are so many personalities and so much going on all at one time and there's just nothing else like it. 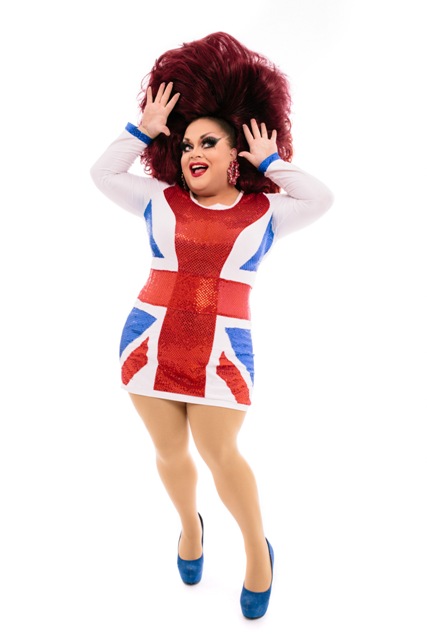 Is there anybody in particular that you're looking forward to spending time with on the road?

Well Katya is one of my best friends in the whole wide world, so I love anytime that I get to like sit with her and just watch her be weird and make fun of her. It's one of my favorite past times. I really love working with Sharon [Needles]. Sharon is one of those unique, crazy energies that - I can't even describe Sharon - she's so talented and she's so smart. It's wonderful to have a conversation with her because she's brilliantly aware of everything that's going on in the world, and it's really fun to have that kind of conversation with her.

So belated congratulations on your placement last season. How has life changed personally and professionally for you post-show?

Professionally, of course, I've had the opportunity to travel the world and meet all kinds of amazing people and just do what I love to do, which is perform, but for a much wider, varied audience than I ever thought that I'd get to perform for. Personally, my life has done a complete 180. I got out of a really bad relationship, I'm in a relationship right now that is probably better than I ever thought a relationship could be. It's amazing. I'm happy with myself as a boy, with my parents, with my demeanor - so I made a lot of personal changes. I lost 55 pounds this year, cut all my hair off, bleached it blonde, pierced my nose, and grew my eyebrows back finally. After years.

In doing research for this article I ran across some of the Reddit threads. Holy crap you have a lot of obsessive fans out there! I guess that's a blessing and a curse?

Well, yeah - I mean I kind of live my life where no publicity is bad publicity but I've certainly gotten a lot of bad publicity from Reddit. For some reason a majority of the Redditers decided early on that they did not like me and it just kind of carried over after the season. It did surprise me a little bit, but at least they talk about me, at least my name still gets out there. There are some of them on there that are very, very sweet, but yes, it's definitely a double edged sword.

What's the strangest fan encounter you've ever had? 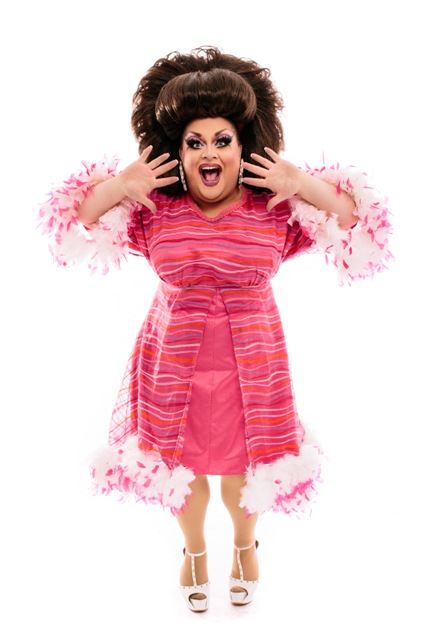 It actually has to do with a Redditer. I was working in Ann Arbor, Michigan and this boy comes up to me - a very sweet, young boy probably about 20-21 - and says to me, "I hated you." And I was like, "Oh.... Hi, My name is Ginger, who are you?" He says me, "My name's not important but I just wanted you to know I hated you on the show. You were such a bitch, you were so mean. I love Pearl and I love Violet [Chachki] and you were so mean to them." And I said, "Well, I'm really sorry that you feel that way, but unfortunately I can't go back a year and a half and re-film it for you." I said, "Also understand, you get to see about 42 minutes of probably 70 hours worth of footage." And at the end of the show he came up to me crying and said, "I'm so sorry, I'm really sorry. I did hate you but I love you now and I just want you to forgive me." And I was like, "Oh, okay. I didn't take it that personally honey but I do forgive you." I don't hold a grudge against anybody who has anything negative to say about me because that's your opinion. Just because you have a problem with my opinion doesn't mean I have a problem with yours, so say it.

We're based out of St. Louis and we are, of course, the city that gave rise to Tina Turner. I wanted to ask you is this Ike Turner thing true - that you called him up to read him for filth after watching What's Love Got to Do With It?

I sure did. I'm obsessed with Tina Turner, she's like my ultimate idol, and when I saw that movie for the first time it affected me on such a deep level that I felt like he had to know - like I had to tell him. It's weird, too, because I've always said that a lot of these Drag Race fans - they get so invested in it that they feel that it's happening right there and then and not realizing that the thing had been filmed almost a year ago. And when I saw that movie for the first time, even though the event had happened 20 years prior, I still felt like I was there in that moment and needed to do something to help this poor woman.

That's wild. So you were a pretty precocious child then weren't you?

Well, I was born and raised Southern Baptist in a very, very small town and was never really encouraged to speak my mind or any of that. I was kind of told to sit in a corner and twiddle my thumbs and not say anything that was gonna embarrass anybody. So as a child I really wasn't that precocious. It wasn't until I got a little bit older and started performing in theater and eventually dabbled in drag that I sort of found my voice. And ever since then there's no shutting me up. 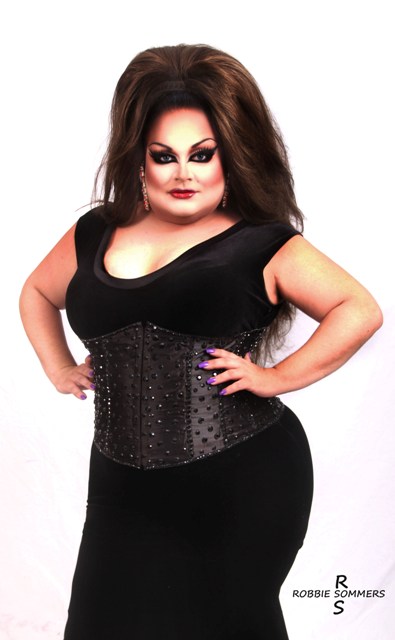 I think it's fair to say that first and foremost you're an actor and entertainer. So what would be your dream role to tackle as Ginger?

I would love to play Edna in Hairspray. I really wanted to do the TV movie next year, I wish they would have given it to me. I would love to play Albin in La Cage aux Folles. I have played Hedwig in the past, I did it for a year and a half here in Florida. So I have gotten the opportunity to play a lot of my favorite roles but I think those are at the top of my bucket list right now.

You mentioned you're from the South - you're a proud Southern Belle. What do you think it is about the region and the community down there that has produced such legendary female impersonators? The South has been cranking them out for 40 years in pageants and on show stages.

You know, drag, it's a regional sport. It changes town to town anywhere that you go in the world, and I think the thing about the South is that we're all about the pageantry of it. It's all about big hair, lots of makeup, sequins, rhinestones and big, loud mouths.

Thoughts on Season 8? And what advice do you have for the new queens as to what they're going to be in store for these next several months?

Don't fall down the rabbit hole, don't go online and read all the comments, don't get caught up in what anybody and everybody and their mother has to say about you and what you're doing. You need to stay focused, because if you do stay focused, you're going to have a long, successful and beautiful career. And if you pay attention to the comments and what you think people think about you, you're going to miss all the amazing opportunities coming your way.

RuPaul’s Drag Race: Battle of the Seasons Extravaganza Tour hits St. Louis on June 7 at the Pageant, and Kansas City on June 8 at the Arvest Bank Theatre at The Midland. For more information, including links to ticket sales, please visit www.rupaulbots.com.