Today instant pics - be they the selfie made headless torsos ones or those with your bff in party mode - are common. We can change our come hither Grindr, Scruff, Adam4Adam, and Growlr profile pictures on a whim.

However, back in the day, a proper gent would have to don their Sunday best and head to a formal portrait studio in the nearest big city to have their picture taken. The photos (known back then as tintypes, daguerreotypes, carte de visites/CDVs, and cabinet cards) would end up in fancy family photo albums for few to see. 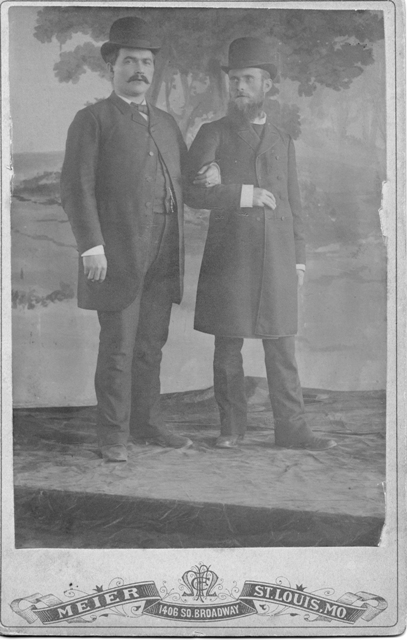 With the click of our phones or tablets, we can now document our history much easy than our LGBT elders and forbearers did. The modern digital age also allows us to preserve vintage images of family, friends, and complete strangers.

There is a growing network in the LGBT community of people who collect and study images of men and women from the 1800 and 1900s who, through a modern lens, appear to be gay or lesbian.

I have been scouring garage sales, flea markets, and eBay for antique pictures of hot daddies and young studs for years and have amassed a large collection. Many of the pictures are solo portraits; however, some include men with men, and sometimes in very affectionate poses. One of these images is in my book.

Let me be perfectly clear, I have no illusion that these pictures are exclusively of gay men. They are for sure all male, but taken in a more innocent time when physical intimacy between men was not the topic of such rigid classification as it is today.

I imagine many of these “men with men” photos consist of brothers or other family members, certainly military/frat/sports buddies, making a photo to send to family and friends. Similar photos exist of women together.

For further insight, I sought advice from Angela Dietz, Director of Digital Initiatives for the Missouri History Museum based in St. Louis, Missouri, and she says it is easy to understand that when we see these old images we hope to see people like us (whoever we are).

“You can understand the need for this, particularly in underrepresented or marginalized communities, it is harder to find these particular histories represented,” says Dietz. “We have an urge and desire for history when there is an absence of it.”

One of my St. Louis LGBT History Project collaborators is James Andris, professor emeritus at Southern Illinois University at Edwardsville, and he recently shared with me a photo of two handsome men with their arms around each other from the 1890s. At first glance they could be more than friends. But they are actually brothers - Daniel and Abraham Fickeisen.

When you know the story behind it, it is anything but a gay picture,” says Andris. I do happen to know the story behind it, because after decades of excavating my family history, starting with my mother's excellent stories, I have written most of it down. So, you're thinking this could have been a picture of a couple of kinda shy dudes that might have had more than a little bit of affection for each other? Right! And also, wrong!”

Andris has documented the complicated life story of these two men (his straight great great maternal uncles), and believes it’s the back story that's important. “When I see an old photograph, most of the time, I'm just curious,” says Andris. And I realize, that without the back story, there's no way I can make sense of the photograph.”

Dietz strongly agrees that we need documentation and stories to go along with our pictures – both past and present. “It is so important for people to think about capturing their stories and pictures, and to preserve them. This will provide resources for historians to use in the future to get the full picture.”

So much LGBT history is missing, or as they say “lost in the shadows.” But we of course know that LGBT folks have been around from the beginning of time, and there is artistic evidence of this from Egyptian and Greek tombs and ruins. However, photography is one of man’s newest inventions and has developed quickly. Here are some highlights:

The web has been a popular medium for storing and sharing photos ever since the first photograph was published on the web by Tim Berners-Lee in 1992 (an image of the CERN house band Les Horribles Cernettes). Today popular sites such as Flickr, Picasa, and PhotoBucket are used by millions of people to share their pictures.

Numerous websites and media platforms (notably Tumblr and Pinterest) have galleries dedicated old time snapshots of men and women together arm in arm - just search for “vintage gay men or lesbian” on these sites and thousands of images will show up (warning some are NSFW).

One of the most popular sites is http://mydaguerreotypeboyfriend.tumblr.com.