So unless you were living under a rock - you saw that this weekend was the second annual RuPaul’s DragCon in Los Angeles, CA.

Since last year I’ve been waiting for this first weekend in May with bated breath. After seeing literally all the fun of last year’s DragCon, and missing out for various reasons, I made it my mission to go to this year’s. I bought my tickets as soon as they went on sale last year, and began saving basically any coin I could for the convention. I also magically somehow was able to get the exclusive “RuPaul VIP” which gave me VIP status for the autograph lines, and the chance to meet RuPaul through a special VIP line. 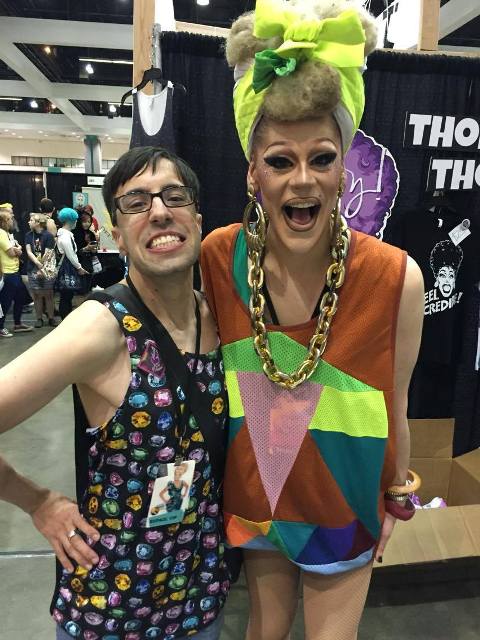 My trip was just excellent, and it all started Friday when I headed into downtown Los Angeles to pick my badges up for the weekend. After getting through friggin gridlock on the 110 freeway (ah L.A., THIS I *NEVER* miss about you), I was down at the stunning Los Angeles Convention Center, waiting in line with the other VIP pass holders. It was here I made my first of many Con friends in this wonderful couple, Sue and Rikki. We began talking and I found people had flown in all the way from Brazil, Australia, even Gibraltar for this, so you knew this was the place to be this weekend! We got our passes and I got settled in with my friends in Silver Lake — who I have to say, are the best at putting me up when I’m on the west coast AND putting up with me.

Saturday was here, and I truly felt like a bride on her wedding day. The big day I’d been waiting for was finally here. I was up super early but it was worth it because I was already jazzed. (I can only imagine how early some of the queens and attendees got up to beat their faces for the day. Some of the looks I saw were so creative and intricate!) It also helped because getting near the Convention Center two hours before DragCon opened at 10 a.m. meant that parking was not crazy yet. I highly advise getting there early, parking at the Convention Center ($15 for the whole day isn't totally ridiculous and is justifiable especially with Los Angeles’s notoriously high parking rates), and trying to get a spot as close to the lobby as you can—that way you can put your purchases in the trunk and not get weighed down. I met up with Sue and Rikki just outside the convention doors as we waited. We took a few pictures with India Ferrah, and saw Michelle Visage come out to tell us that VIP pass holders were going to be let in at 9:30 a.m. (a half-hour before the official opening) before the ribbon-cutting with RuPaul (who, with the requisite golden scissors, jokingly welcomed everyone to “our second annual RuPaul’s Drag Race Bris”).

Once inside, I literally twirled around to take the space in. From everyone I spoke to who had attended the inaugural DragCon last year, there was nothing but positivity for the increase in space this year. I made a beeline for the VIP line to meet RuPaul, and I was the second person of the day to meet Ru. Before you all ask, he was out of drag — because as we all know good and well, Ru doesn’t do drag unless he’s getting paid for it (i.e. Drag Race). But I was absolutely ok with it, I was just excited to meet someone I have looked up to for years, and consider a guiding light. (There is a literal screen capture on my mirror of Ru from season 7 saying “I don’t wanna hear any goddamn excuses!” that motivates me daily.) Once I was in with Ru, we took our picture, and he signed my stuff as I tried to remember what I had been practicing saying for months so THIS EXACT SCENARIO WOULDN’T HAPPEN. I ended up eeking out “Thank you for making me a better person and a better queen.” He smiled and said “That’s sweet. I do this cause it’s fun. If it’s not fun, why do it?” 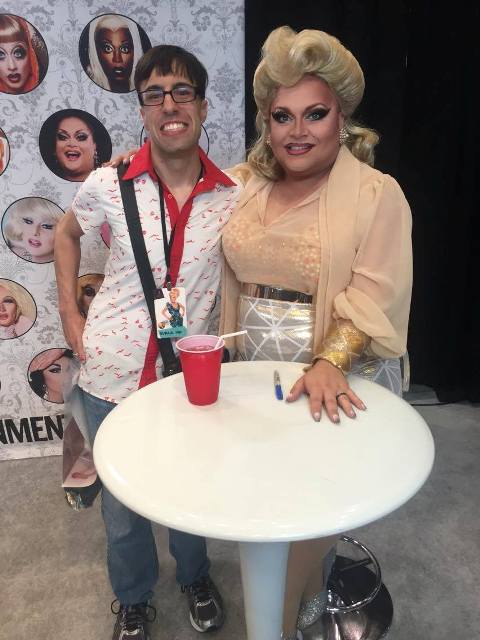 After calming myself down from an adrenaline high like no other, I made my way around the floor, visiting booths, taking selfies with so many amazing queens. And it is here that I am gonna tell you this little bit of advice, for everyone shocked some girls were charging for pictures.

Bitches, this is a convention at its core. Conventions aren’t cheap, and in many cases, exhibitors pay for the booths and are not paid by the convention itself. So that’s where the merchandise and fees come in. I don’t necessarily agree with it, but the thing is, it’s smart because you have to remember, these girls are canceling gigs to come in and meet their fans. And most of them were really reasonably priced. April Carrion was only charging a dollar for a picture with her signature umbrella, Acid Betty you got to meet her, get a sticker and two buttons for $5. Most queens if you bought merchandise, you got your picture for free. Really it’s not that bad. Plan ahead, save your money and you should be good.

That also brings me to my next point, something I HIGHLY encourage you to do: learn the art of a quick selfie. Most queens, if they were on the floor and not at their booth, were more than happy to take a selfie, usually followed by the words “It’s gotta be quick.” Be polite, learn where the light is (although all t, all shade, that convention lighting was nobody’s friend), learn the good flattering angles and learn to snap quick! Plus if you wanna really try and save coin, it’s the best way to avoid those pesky lines and pricing. And bring a portable phone charger because you will be going into overdrive (or at least I did) taking pictures, posting them to Facebook and social media.

Speaking of lines, they varied depending on the queen. Jeffree Star, whose makeup line was a presenting sponsor for the convention had a line stretching over at least three aisles of the convention floor. Katya’s line NEVER went down both days and her booth was packed - but that was also because she was truly visiting with each person that came to see her. Bob the Drag Queen’s was packed both days, Naomi Smalls and Kim Chi (who shared a booth)’s too, to the point it almost was out the convention doors on that side of the space! Alyssa Edwards’ line ebbed and flowed, ditto that with Detox, Raja and Shangela, to name a few.

I met a total of 24 Ru girls on Saturday, and 11 celebs, who all were very gracious. My tip? Play the lines just right. Sometime you’ll have to wait, other times you can time it just right and get a bunch of queens. And every single queen I met was happy to be there. Highlights (if there’s a way to condense the epicness….there’s not but I’m not gonna subject you to a detailed play-by-play) for me included Ginger Minj knowing me from my live-tweets of last season, Michelle Visage introducing me to her daughters as “the queen that did the Hamilton number I showed you!”, Brendan Jordan (one of my fiercest inspirations, and I tell you all-this kid is going places!) with a big smile telling me “I see you on Twitter, girl!” and getting Chad Michaels to record a Mother’s Day message for my mom. 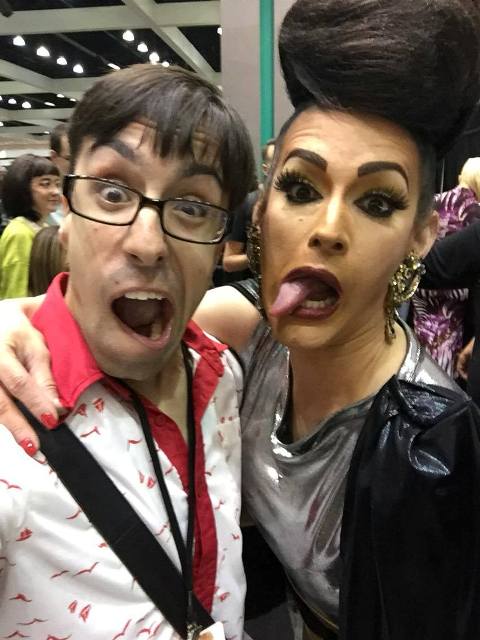 Panelwise, I’ll be completely honest, I only attended one, mostly because they were being recorded to be put on YouTube. And yes that’s a total copout but the convention, for me, was meeting my fellow artists, people I’ve looked up to and people I’ve kikied with online to met in person. But I DID go to the Beauty and the Geek panel where Ginger Minj turned Star Trek The Next Generation star Wil Wheaton into a drag queen in 50 minutes. Their back-and-forth banter was so natural you’d think they were lifelong buds! (Best part? The panel was running over so at the end, Ginger was totally slapping makeup on Wil’s face!).

Day two came around and this time, Sue, Rikki and I were of one mind. We rushed to Kim and Naomi’s booth, getting to the front EARLY. Sue and Rikki paid for their pic and invited me in, which I thought was BEYOND sweet, so when we lined up for Robbie Turner, I repaid the favor. As we left Robbie’s booth, I got my life and highlight of the weekend: RuPaul was in a full suit on ROLLER SKATES, skating around the floor, handlers following him closely. While Sue and Rikki went to go meet RuPaul, I roamed a bit, catching up with a few friends before seeing a break in the line for Acid Betty. Sundays for conventions are notoriously lighter, attendance wise, so I was thanking my lucky stars. Just as I got to Acid Betty, to my delight I saw that Thorgy Thor’s line was also not too bad. So right after I thanked Acid, I got into Thorgy’s line. With Thorgy, I had to wait even a lil longer because she did a quick interview with some media during our line, and a quick shoutout on Moovz when Jiggly Caliente came by. But she thanked us for waiting, and for me that goes a long way. Sunday for me was a bit more chill, maybe because the lines just seemed easier to navigate with less congestion. I had every intention of heading to the keynote with Ru, but looking upstairs at the panel rooms at noon (when the address was at two), the line was already insane. I was following it intently on Twitter, and once that shit is on YouTube I will definitely be tuning in. But from the highlights, it sounded epic!

Day two’s highlights included finally meeting Wendy Ho (literally everyone of her St. Louis dates I’ve been either working or out of town!), asking Big Freedia her opinion of her lines being cut from the release of “Formation” on Beyonce’s Lemonade (yes, I went there! Truth be told she was totally ok with it, knowing it was for the video only), seeing the wonderful Nina West post-Sia Coachella inspiration (sidenote: Bob auctioned off her Purse Purse (aka Purse First) for charity, Nina won it for $425, and gave the purse back telling Bob to keep the money. Class. act!), running into my People’s Couch/Twitter friend Blake McIver and reconnecting with my good judy Laganja Estranja. Sue, Rikki and I said our goodbyes and I headed back to my temporary home.

DragCon may have been crazy at times, it may have caused a lot of strain on my legs, but it was one of the most wonderful times I have ever had. I left there with a ton of memories, new friends and renewed confidence in myself, my art and the way I carry myself. Say what you want about RuPaul, Drag Race and conventions - but there was nothing but good vibes in that convention hall, and everyone was truly feeling the love. They’ve already announced DragCon 2017 and I am already beginning to save my pennies so I can relive this awesomeness again!