It was as if someone hosted a Pride night and forgot to bring the Pride. Literally. The St. Louis Blues third annual Pride Night, on Tuesday, left LGBTQ fans puzzled and angry with a (and we're being generous here) watered down version of Pride Night at Enterprise Center.

Gone was the rainbow lighting racing around the arena and on the jumbotron. Gone, too, were the specific mentions of the event being Pride Night, including shout-outs to the LGBTQ community and mentioning sexual orientation and gender identity at the opening. There were no Erin O'Flahertys or Jake Baims to be found on the ice; there was no rainbow flag this time around. 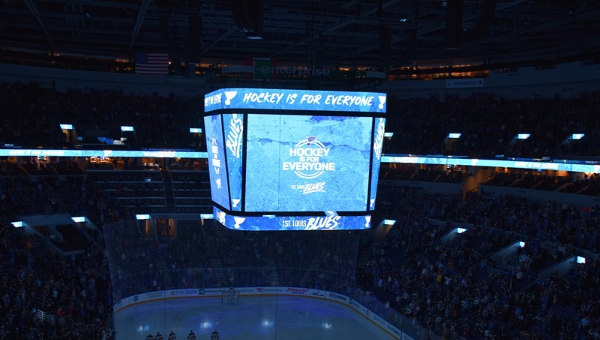 While there were brief moments of recognition with the Gateway Men's Chorus singing the National Anthem, the introduction of a LGBTQ police officer, and the Transgender Clinic at Children's Hospital featured on video, the event felt very different from the previous two years. An email to the Blues about the changes has not been returned at this writing.

"Starting last year, the NHL created the “Hockey is For Everyone” initiative league-wide," said Blues Operations Director, Jason Pippi, of the changes. "The goal is to communicate that hockey is an all-inclusive sport for fans, players and staff. We made every effort to recognize as many communities as possible, including the LGBTQ community. I’m sorry that you were underwhelmed with the overall theme last night. As we continue to go forward, we are continuously learning and tweaking to try to find the right balance of community representation. So this feedback is really helpful to the Blues to make sure we are hitting our marks in upcoming years."

Tuesday's game, where "The Notes" trounced the New Jersey Devils, was in fact part of the NHL's "Hockey is for Everyone" initiative, which runs throughout February. But Pippi's response raises several questions, including: Why continue to call it Pride Night?

The special Pride Night theme ticket, which had purchasers use the code PRIDE19, included a rainbow Pride/Blues expandable backpack and helped support the You Can Play project, which works to ensure safety and inclusion for all who participate in sports, including LGBT athletes, coaches and fans. You Can Play believes sports teams should focus on the athletes' skills, work ethic, and competitive spirit, not their sexual orientation and/or gender identity.

Several prominent elements were absent this year – elements like the rainbow ribbon boards, the iconic rainbow-themed Blues note on the jumbotron, announcements mentioning the LGBTGIA+ community, the Rainbow Flag in the color guard, and an honorary member of the community to drop the first puck.

"Starting last year, the NHL created the ‘Hockey is For Everyone’ initiative league-wide," Blues Operations Director, Jason Pippi, told #Boom Magazine. "The goal is to communicate that hockey is an all-inclusive sport for fans, players and staff. We made every effort to recognize as many communities as possible, including the LGBTQ community."

Per reporting from the Riverfront Times, Blues spokesman Dan O'Neill, despite the heavy promotion and theming surrounding the prior two years, suggests Tuesday wasn't meant to be Pride Night at all — but rather an "all-inclusive" night called "Hockey Is for Everyone."


Given that the Pride Night designation was removed from the team’s website only days before the game and that there was no mention of the theme during Tuesday’s game, we have to question why they would still call it Pride Night? Can we still call it a Pride Night? The St. Louis Blues made no effort to inform Pride St. Louis or the broader community of the change in theme prior to the event; meanwhile, they continued to sell the themed tickets.

“Many in the community feel this is a prime example of Rainbow Capitalism,” points out Harper. “We were honored that the team wanted to show their support for the community, however this year we saw their true colors. Pride St. Louis learned Tuesday Night… Hockey isn’t for everyone.”