You may not know him by name, but you will surely recognize a series of books that he has authored called BOYSTOWN. Jake Biondi’s gay book series features sexy covers, relatable characters and as much drama as a telenovela. (Check out our full interview with Biondi here.)

That said, BOYSTOWN fans rejoiced this week when Biondi revealed the cover and release date for the highly-anticipated ninth book in the series. BOYSTOWN Season Nine will drop on December 14, 2018 and Biondi has once again teamed up with designer Anna Crosswell of Cover Couture to create the latest BOYSTOWN book cover. 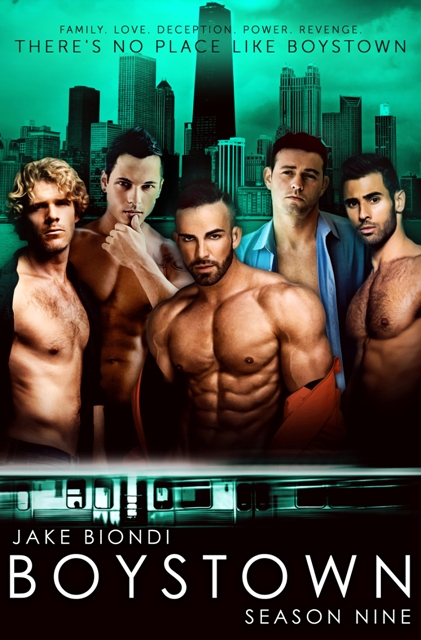 “BOYSTOWN is my favorite guilty pleasure,” said cover model Jake Jensen. “I love the relationships, drama, intrigue, and twists and turns. Each book is full of sexy surprises and I can’t put them down. It was a huge honor to get asked to be one of the cover models for BOYSTOWN. I love the series, so having the opportunity to have my face as part of the brand is very cool.”

“From the moment I started reading the BOYSTOWN series, I fell in love with it," he explained. "Such a captivating series that leaves you wanting more. I couldn’t put the books down. Each one ends with a killer cliffhanger leading you into the next book. This is such a cool experience, to see myself on the covers of this great book series.”

Biondi calls the ninth book a special one and that a holiday release date seemed appropriate.

“Because of the success of the series, fans from all over the world have been asking me when book nine will be available," said Biondi. "The events of the ninth book take place during the holiday season so the timing is perfect.”

“I love that fans are connecting with the characters and want to know what the future holds for them," Biondi added. "The broad appeal of the book series is amazing. BOYSTOWN has an incredibly diverse audience.”

Cover model Kyle Goffney also sang Biondi's praises: “He’s professional, encouraging, talented, and focused, all of things which I respect and admire. It’s really cool to be a part of something so creative and enticing. It’s not every day a guy gets featured on the book covers of such a cool series.”

“It’s been an absolute pleasure working with BOYSTOWN series creator Jake Biondi,” offered Jensen. “I have a great amount of respect for his writing and his work.”

“There’s some exciting things in store for the BOYSTOWN series, and I’m honored to be working on this project as well as being on the covers. Jake is very creative and this is only the beginning,” Bailey teased.

Biondi promised that readers won’t be disappointed by his latest installment: “Season Nine picks up right where book eight left off. Season Nine features a number of surprises, including the deaths of several characters, and an ending that will blow readers away.”

The BOYSTOWN book series continues to maintain an average customer rating of five stars, the highest possible rating on Amazon.com.

“Jake Biondi is one of the most masterful writers of fiction of our time,” said Roger Ward in his review of the BOYSTOWN series. “The saga is told masterfully through several subplots which include unforeseen twists and turns that will leave the reader stunned and speechless.”

BOYSTOWN Season Nine is currently available for pre-order on iTunes, Kindle, and Nook. The series is available in paperback, audio book, and all e-book formats. Readers may order autographed paperback copies of the books directly from BoystownTheSeries.com.