The Missouri Democratic Party’s LGBTQ+ Caucus (“LGBTQ+ Caucus”) is formed within the Missouri Democratic Party to provide voice and representation of the LGBTQ+ community within the party structure. The LGBTQ+ Caucus works to ensure equal rights of LGBTQ+ Missourians through advocating for effective legislation and policies and in public forums, recruiting and supporting LGBTQ+ and ally candidates, and serving as a general platform for the LGBTQ+ community’s civic engagement and expression. 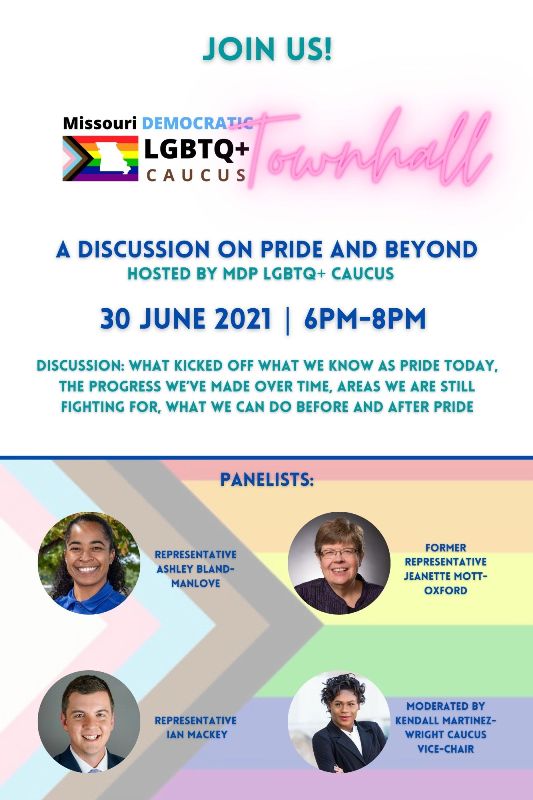 The LGBTQ+ caucus is happy to announce its first virtual, public Town Hall forum, on Wednesday June 30th, from 6pm-8pm to discuss the past, the present, and the future of Pride. The speakers at the forum are; Representatives, Ian Mackey & Ashley Bland-Manlove, former Representative Jeanette Mott-Oxford and is moderated by the Caucus Vice-Chair Kendall Martinez-Wright. The LGBTQ+ Caucus invites everyone to join us by signing up at https://bit.ly/mdplgbtqtownhall.

“Our main goal as a caucus is to lift up the voices of LGBTQ+ humans in Missouri," said Taylor Anderson MacMann, Chair, Missouri Democrat LGBTQ+ Caucus. "The event on Wednesday will be an excellent opportunity to hear about how Pride started, what we are doing today to continue celebrating and what can be done tomorrow to ensure the groundwork is laid so the fight only gets easier.”

The LGBTQ+ caucus also calls for more interested LGBTQ+ community members and allies to join our efforts. The caucus signup form is at https://bit.ly/mdplgbtqsignup. The LGBTQ+ caucus sends emails throughout the month to keep its members informed on LGBTQ+ legislative affairs and events.