WASHINGTON, DC - The National LGBT Chamber of Commerce (NGLCC), the business voice of the LGBT community, is proud to announce Nashville Mayor David Briley has signed an executive order including NGLCC certified LGBT Business Enterprises (LGBTBEs) in contracting and procurement opportunities throughout the city. For LGBT citizens of Nashville, this inclusive policy provides fair and equal access to contracting opportunities and economic development programs that drive innovation, create jobs, and promote economic growth throughout the region. 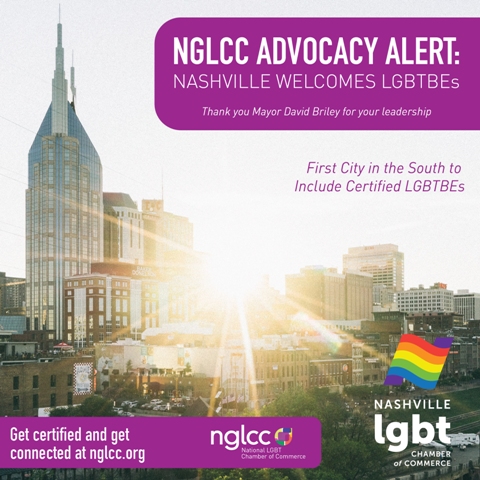 This Executive Order makes Nashville the first city in the southern United States to intentionally include LGBT-owned businesses in municipal contracting and procurement opportunities, a best practice of the private sector and of an ever-growing number of states and municipalities thanks to the advocacy of NGLCC and its state and local affiliate chambers like the Nashville LGBT Chamber.

“Thanks to the leadership of Mayor Briley and of our local affiliate chamber, the Nashville LGBT Chamber of Commerce, LGBT entrepreneurs in the Nashville region will now have the opportunity to create jobs and develop innovations that benefit all who live there. History has been made here in Nashville, and this victory for inclusivity has once again proved our core values that ‘diversity is good for business’ and that ‘if you can buy it, a certified LGBT-owned business can supply it.’ We are excited to see LGBTBEs in every field, from construction to catering and everything in between, help grow the economy of Nashville and beyond,” said NGLCC Co-Founder & President Justin Nelson.

“While we have a long way to go for LGBT equality in the region, the South has always had a strong and growing network of NGLCC Certified LGBTBEs and LGBT-owned companies. We hope this Executive Order in Nashville will encourage more mayors to proactively include the LGBT community for the optimum social and economic health of their cities. Collectively, LGBT-owned businesses contribute to the $1.7 trillion dollars that the LGBT business community puts into the national economy. Progressive and inclusive leadership, like that of Mayor Briley, will ensure greater access to the American Dream for every American,” said NGLCC Co-Founder & CEO Chance Mitchell.