The Human Rights Campaign (HRC) Foundation, in conjunction with the Equality Federation Institute, has released their 5th annual State Equality Index (SEI) - a comprehensive report detailing statewide laws and policies that affect LGBTQ people and their families, and assessing how well states are protecting LGBTQ people from discrimination.

Illinois was among the 16 states and the District of Columbia to be placed in the highest rated category, “Working Toward Innovative Equality”, while Missouri was one of the 28 states to receive the lowest rating, “High Priority to Achieve Basic Equality”. 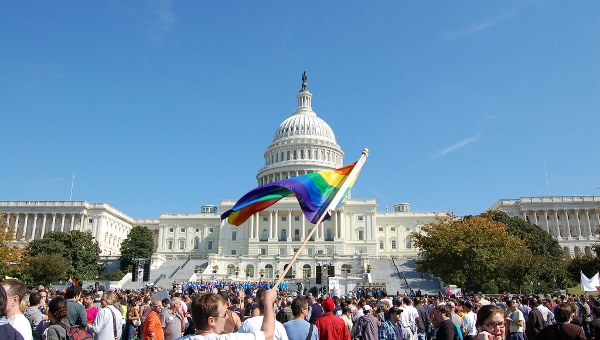 As civil rights organizations work toward passage of these critical federal protections, accelerating progress at the state level is critical. This year, the number of states that obtained the SEI’s highest rating, “Working Toward Innovative Equality,” increased from 13 to 17. These states, and Washington D.C., currently have robust LGBTQ non-discrimination laws covering employment, housing and public accommodations, as well as protections in the areas of credit and insurance.

This SEI report comes as more than 46 state legislatures have opened their sessions -- and with New York kicking off the year on a tremendous note by passing both the Gender Expression Non-Discrimination Act (GENDA) and legislation protecting LGBTQ youth in the state from the dangerous and debunked practice of so-called “conversion therapy.” The Virginia State Senate has also passed legislation that would prohibit discrimination on the basis of sexual orientation or gender identity. And governors in Kansas, Ohio, Michigan and Wisconsin signed executive orders protecting LGBTQ state employees.

The U.S. House is soon poised to begin considering the Equality Act, a historic bill that would provide consistent and explicit non-discrimination protections for LGBTQ people across key areas of life, including employment, housing, credit, education, public spaces and services, federally funded programs and jury service. More than 130 major employers, with operations in all 50 states, have joined HRC’s Business Coalition for the Equality Act, urging Congress to pass these crucial protections.

“The work of the HRC Foundation and programs like the State Equality Index, along with HRC's efforts day in and day out to advance protections for LGBTQ people at the state and federal level are vital to the struggle for LGBTQ civil rights,” said HRC President Chad Griffin.”HRC and our partners on the ground defeated dozens of anti-LGBTQ bills last year, and worked to pass crucial pro-equality measures that ensure LGBTQ Americans are protected wherever they live. Already, we see the promise of even more protections passing in 2019 -- with action taken in New York, Virginia, Kansas, Ohio, Michigan and Wisconsin.”

“However, LGBTQ people still face the sobering reality that their rights are determined by which side of a state or city line they call home," Griffin continued. "As this year’s State Equality Index makes clear, the time has come for us to do away with this patchwork of state laws and to protect all LGBTQ people by passing the federal Equality Act.”

“The strength of the state-based LGBTQ movement is critical to elevate our representation, visibility and equality across the country," said Rebecca Isaacs, executive director of Equality Federation Institute. "As we look to the next legislative session, the State Equality Index should serve as a recognition of how far we have come and how much we have yet to achieve."

Advancing LGBTQ nondiscriminaton protections at the state and federal level is supported by a wide swath of Americans. In fact, a recent PRRI survey found that 71 percent of Americans support LGBTQ non-discrimination laws like the Equality Act. An estimated 8 million LGBTQ Americans, their friends and families remain at risk of discrimination if they live in one of the 30 states without adequate protections. A map of this patchwork of laws can be found here.

This year’s SEI also details the onslaught of more than 100 anti-LGBTQ laws introduced across 29 states during the 2018 state legislative season, including proposals to grant sweeping licenses to discriminate, undercut marriage equality and target the transgender community -- including transgender children. HRC worked on the ground with local advocates and allies to defeat all but two of these bills.

The report also points to encouraging progress for LGBTQ youth, as well as transgender and gender non-conforming people seeking to update their identity documents. Last legislative session, New Hampshire Governor Chris Sununu signed HB 1319 into law, protecting transgender individuals across the state from discrimination in employment, housing and public spaces. Additionally, a record five states -- Delaware, Hawaii, Maryland, New Hampshire and Washington -- passed new protections against the practice of so-called “conversion therapy,” bringing the total number of states with such laws or regulations to 15, plus the District of Columbia. New York, which has had regulatory restrictions against the practice since 2016, kicked off its 2019 legislative session by enacting a law solidifying and expanding these protections.

HRC’s full State Equality Index report, including detailed scorecards for every state; a comprehensive review of 2018 state legislation; and a preview of the 2019 state legislative session is available online at www.hrc.org/sei.