St. Louis-based author Chris Andoe's pen is immeasurably talented. At times, it has landed with the force of a well-swung sword, but with his latest offering, House of Villadiva, he retells fascinating stories with a surgeon's delicate touch. His sophomore offering, the much anticipated follow-up to Delusions of Grandeur, showcases a more nuanced, forward-thinking voice as he weaves a tapestry of observational prose rooted in the Midwest's LGBTQ community. Andoe's voice is reminiscent of Capote and Thompson (Hunter S.) as he shares his compelling tales of real-life cast members in this memorable tome. Everyone has skin in this game, including the scribe himself, as he peels back the curtain of community and all the sensational and tender stories that follow. Storytelling is a particularly American form of communication and Andoe has mastered the medium with House of Villadiva.

Below is our interview with the author ahead of his June 3rd book release: 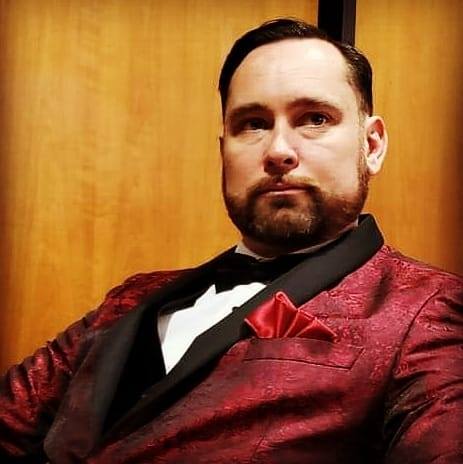 I'm obliged to point out that myself, my late husband, my business partner, and #Boom and associates all make an appearance within the 500-plus pages that are House of Villadiva. In formulating this interview, it struck me how unlikely this meeting might seem to our respective followers. But you and I made a conscious choice to "reset" our relationship a few years ago when you took the helm of Out In St. Louis (It's all in the book, folks) and we've since collaborated on several projects and rekindled an original friendship. Any thoughts on that?

When I returned from New York in 2014 I found that we were on opposite sides of a new media war. Like actors assigned roles, we took our places. After years of a bitter rivalry, you extended an olive branch and poof, it was all water under the bridge. Oftentimes making amends really is as simple as reaching out, and I’m thankful you did, and that Kurt was able to see it. He was always above the fray, pushing us all to be better.

Ah, thanks for that! Forgive the segue, but let's start with the pandemic that's impacted us all. I think it's fair to say that we wouldn't have a June 3rd release of Villadiva if COVID-19 hadn't happened. What was it like for you?

At the beginning of 2020 I thought the book was at least two years away, if not more. Much of Delusions was written while I was dealing with the dissolution of a 12-year relationship, and I laughed that House of Villadiva was progressing so slowly because I was too happy. The pandemic freed up a lot of time and allowed me to focus. Having the book to work on also made things a little more bearable. I missed friends a little less because I was bringing them to life on the page.

What genre would you assign to the book?. It involves real-life characters in St. Louis and Oklahoma City's LGBTQ community. Is it non-fiction, is it storytelling, or something in between?

It’s classified as an LGBTQ memoir, although that implies it’s mainly about me, when I’m one of countless characters. It’s non-fiction.

You're an Oklahoma native who moved to St. Louis and fell in love. You then went on to live on both coasts only to return. What makes our Midwest LGBTQ stories so compelling?

As a storyteller, St. Louis is such an incredible muse. I’ve long said if she were a movie character, she’d be Sunset Boulevard’s Norma Desmond. For those unfamiliar with the reference, Norma Demond was a rich, eccentric old diva rattling around in a big antiquated, somewhat decaying mansion. In the silent movie era she had been the biggest star the world has ever known, but was largely forgotten. Like Desmond, St. Louis reminisces a great deal about her magnificent glory days. Like Desmond, St. Louis is regal and wildly eccentric. 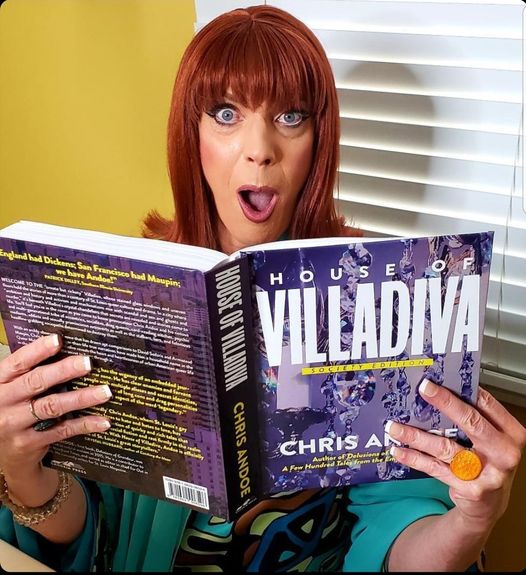 To say this town has backstory is an understatement. We are built upon the ruins of the largest prehistoric city north of present-day Mexico. We’ve had a menacing reputation since at least 1673, when French explorers were terrified upon seeing the monstrous cliff paintings of the Piasa Bird 100 feet above the Mississippi near present-day Alton. For a time, we were the 4th largest city in the nation, and the largest west of the Mississippi. In 1960 we were larger than Dallas and Atlanta combined. History is so important here because we’ve got such a wealth of it.

I’ve also found that, literarily speaking, this city has the perfect balance for character development. Cities smaller than ours often have far fewer interesting characters to write about, and booming cities are too transient. As I wrote in my first editor’s letter: Some cities have no memories. Some are just nice, sedate places without roots, while others have transient populations and ephemeral cultures. In such cities, clean slates are easy to come by. St. Louis is not among them. Ours is an opera of larger-than-life characters with long histories of collaboration and conflict. Ours is a haunted city that writhes, a passionate city that burns.

I read when you pitched your first book, Delusions of Grandeur, that an editor said that there were too many characters after page 48. Talk about the decision process of what to include. What makes a good story?

Delusionsoriginally covered my first 40 years, which was way too much. It was Postcards from Palm Springs author Robert Julian Stone who gave the blunt critique. I went through the seven stages of grief, and then cut everything predating my 1997 move to St. Louis. Some of what was cut will hopefully go into a prequel to Delusions titled Habana Inn.

Readers want to get to know and then follow characters, and see how their stories intertwine. The original manuscript of Delusions had too many dead-ends. I’m so thankful for Robert’s assessment. We’re in a time right now where critique is out, replaced by mindless validation. Had my unwieldy manuscript simply been validated, I would have produced an inferior book.

I found your latest offering a much more refined and disciplined book. What did you learn from Delusions that you applied to Villadiva?

Delusions covered 17 years with large passages taking place in San Francisco and Oklahoma City, so there were less opportunities for through lines and character development. By contrast Villadiva covers only 6 years, with nearly all of it taking place in St. Louis, particularly in Tower Grove, Soulard and Alton. There was also a hurried urgency to completing Delusions. My dad died at 41 and I was approaching that age. I had a nagging feeling I might not live to see the book completed.

I wrote much of Delusions from California. I was less invested in the community and was more flip in my attitude. One of the things I love about getting older is gaining wisdom, empathy and perspective. Not that I’ve mastered those qualities, but I feel I’ve grown a great deal in recent years.

I was trying to think of how we first met and it was definitely through social media. You've become a master of the medium, both entertaining and controversial. What's your general approach on how to use it?

Yes, you noticed me from the stories I’d post to Facebook, and convinced Darin Slyman to add me to the roster at Vital Voice.

I’ve heard people say I’m good with social media but I think it’s more accurate to say I’m good at Facebook. I primarily use Twitter to get news, and I have an average Instagram following. I don’t use Snapchat.

What’s worked well for me is humor, as well as being authentic and original. I’ve been able to build an audience with my storytelling.

It goes without saying that writing about real people lends itself to criticism, but no one can say it isn't well written. How did the talent for storytelling manifest itself in you? You came from a storytelling family, correct?

My dad was born in the North Tulsa house The Outsiders was filmed in, and my grandmother lived a block from there, near the train tracks, in my youth. The entire family would sit in metal rocking chairs under a big tree and tell stories, and because there’s such a storytelling tradition in my family, you had to hone your craft to get their attention and to keep it. Add to that the need to be succinct in order to keep your story from being cut short by a passing train.

My brother Joe was also a major influence. After writing his 2007 memoir Jubilee City, he told me to write a story like I would tell it. That simple advice de-mystified the writing process. 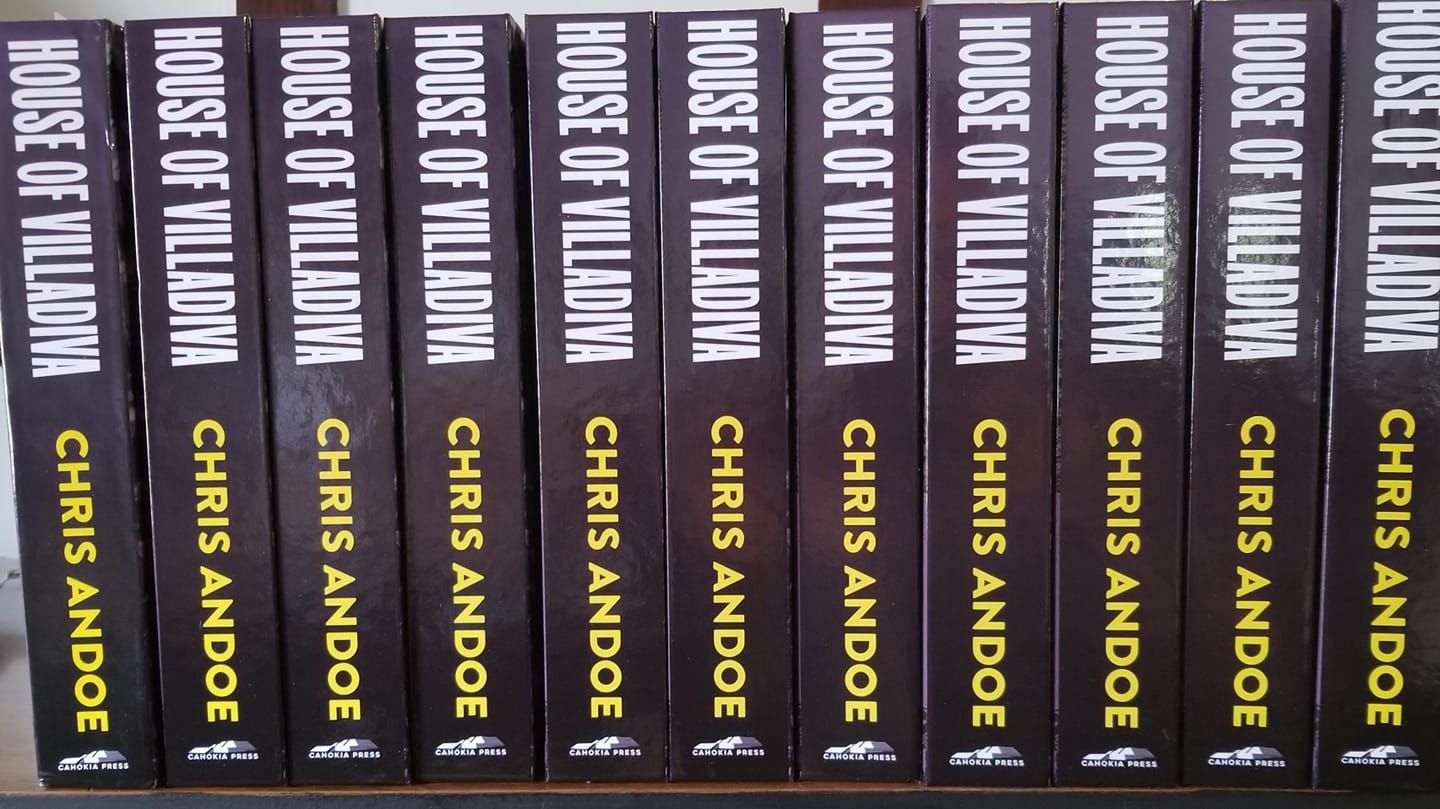 How do you handle controversy or criticism or both? It has to have an impact.

I’ve survived this long by telling the truth and developing a thick skin. I understand that just because someone is mad for a moment, it doesn’t mean they’re an enemy for life. Giving people the space to have differing opinions is critical.

We all have our Achilles Heel, though, and in the past few years a group of foes learned that mine was my husband. They came for him relentlessly, even creating a meme mocking him for being depressed at one point. During those times I felt powerless, and even wondered if he’d be better off if we were not together. I’ve dealt with it by talking it out with him and other close friends, and of course writing helps to bring about closure. As the saying goes, the victor writes the history.

Many, which I lay out in the book.

What message do you hope people take away after reading House of Villadiva?

I want people to see St. Louis the way I see it, as a fascinating place with a rich history and a unique culture.

If you had to pick a single character's storyline from either book to include in a time capsule, who would it be and why?

It’s a great question, but hard to answer. In Villadiva, entire neighborhoods are akin to characters. I’ve enjoyed documenting the mysticism of Alton and the colorful intoxicated camaraderie of Soulard, for example. I think I’d want people far into the future to feel like they walked the streets of these places, and knew my respective tribes and their haunts. 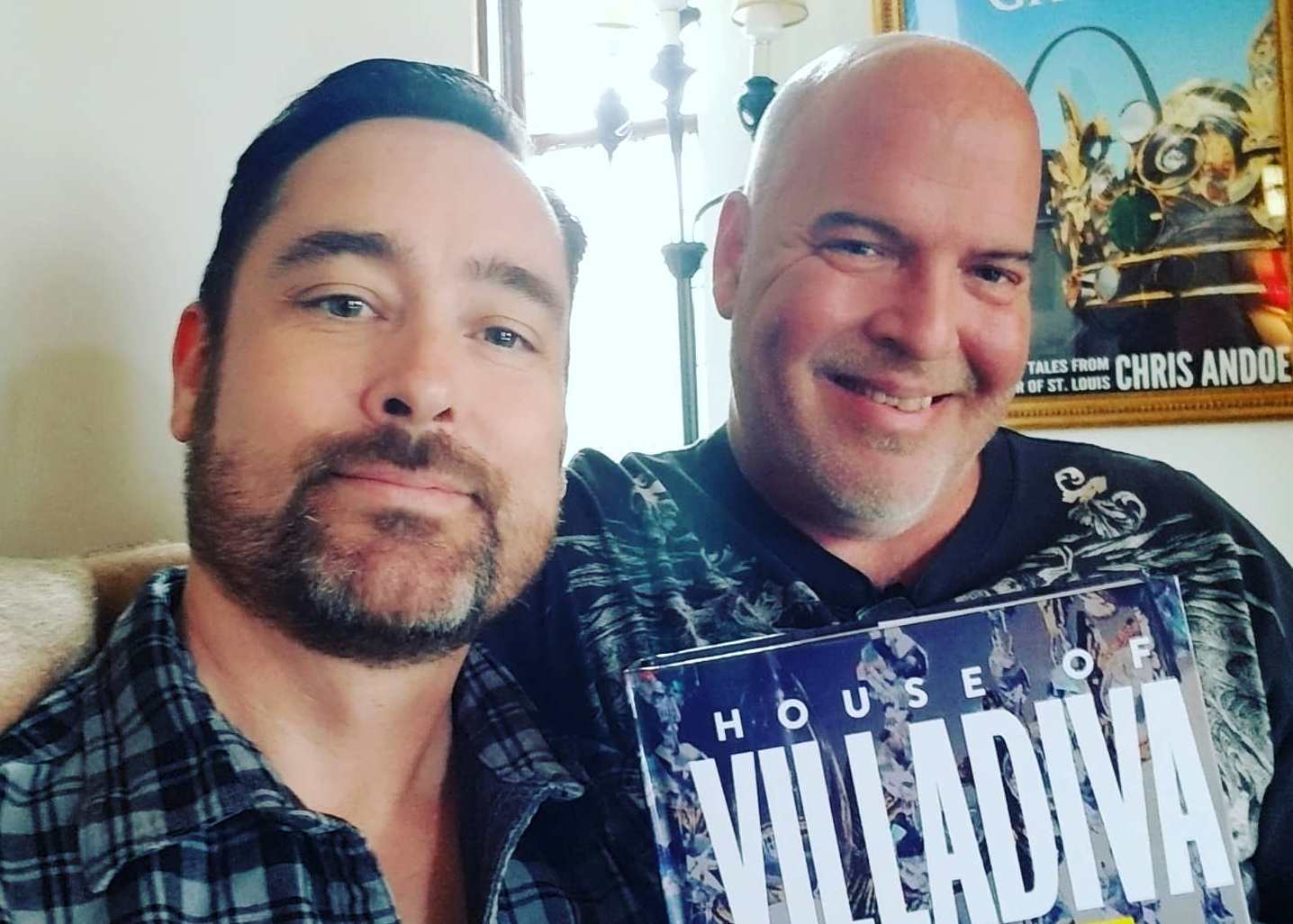 You dedicated this book to your husband. I know first-hand how important the support of a partner can be. How has Kage helped you out during this whole process?

Kage is a calming influence with such a capacity for joy. He has given me all the time and space I’ve needed to work without complaint. He’s always present and ready to hear a passage, or allow me to vent. He’s an ideal companion.

I want to thank you for your friendship and support, Colin, and also for your good humor about your role in Delusions. We’ve had a fascinating journey.

*House of Villadiva will be released on June 3rd with a red-carpet extravaganza at Boo Coo in Soulard, hosted by “Maven of Mardi Gras” Luann Denten. Doors open at 5:30, with prize drawings for those who arrive before 6:00 p.m.

The book can be purchased on Amazon, Barnes & Noble, or wherever books are sold.